CCMAC has been advising and supporting a whole host of architects, consultants and council officials to ensure new developments planned across Clapham Common in 2016 are in line with our objective for a ‘thriving Common, today and for future generations’.

The first project likely to start work in the spring is for a safer and quieter cycle route – called a Quietway – penned to run from Waterloo passing across Clapham Common after which it splits into two spurs to Croydon and Wimbledon.

Quietways are cycle routes that follow London’s backstreets and run along parks and waterways, providing an alternative for people who are keen to travel by bike but are put off by busy roads.

CCMAC is working closely with Sustrans, the cycling organisation charged with implementing the Quietways, and the London Borough of Lambeth (LBL) to ensure that, if the project goes ahead, the route across Clapham Common is completed with minimum net impact and does not affect unduly other users of this popular open space.

Karthaus Design and the University of East London have been charged with designing plans to develop and refurbish The Spinney (part of Clapham Manor Children’s Centre) on Windmill Drive. The aim is improve the popular day care facilities for children aged 2-5. Karthaus Design intend to apply for planning permission to the LBL in January 2016.

Opposite The Spinney is the green waste site which has undergone some significant changes over the past year with Bandstand Beds, the Common’s food growing group, playing a pivotal role in its redevelopment. In a partnership between the LBL and CCMAC, the rest of the site will be cleared and replanted with trees and shrubs, further improving the biodiversity of the Common.

As part of the Quietway, there is also a proposal to close a small section of Windmill Drive between The Spinney and the green waste site, a move long supported by CCMAC in its Clapham Common Masterplan. This will not only return land back to the Common but it will also prevent speeding drivers using the road as a ‘rat run’.

The basketball courts beside Rookery Road are also set for an upgrade with new surfaces and hoops.

In December last year, plans presented by Transport for London (TfL) were approved by the LBL for the redevelopment of the deep-level air-raid shelter on Clapham Common opposite Clapham South Tube Station. 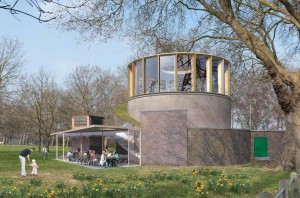 TfL want to use the shelter’s rotunda space above ground for a new café and an exhibition space documenting its history, while underground London Transport Museum will organise tours of the shelters which were built during the Second World War as a refuge from the Blitz.

After the war, the shelters were used to house some of the Caribbean immigrants who arrived on the Windrush in 1948 before being housed, with many settling in Brixton.

Two dormant structures are also likely to spring back into life in 2016 if all goes to plan. The water pipes that feed both the Temperance Fountain and paddling pool are being repaired. If successful it will be possible for the fountain to be spouting water again. Across The Pavement at The Polygon, the disused toilet block now has planning permission to be repurposed as a cafe. 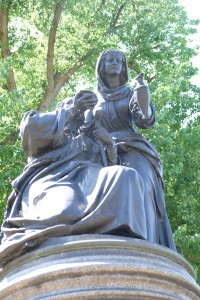 We will be working with the LBL on the plans for the building and the planting around it, before work can begin to transform a building that has stood empty for some 20 years.

Finally, the grassy knoll behind Clapham Common Tube Station is set for re-landscaping, hopefully, by July, in a project led by This is Clapham. Coupled with 14 new trees scheduled to be planted across Clapham Common in February by the Friends of Clapham Common, both projects will further enhance the Common’s open green space, an emerald treasure for all to enjoy.

If you have some exciting news or an upcoming event related to Clapham Common and you'd like to post details on our website, please get in touch.